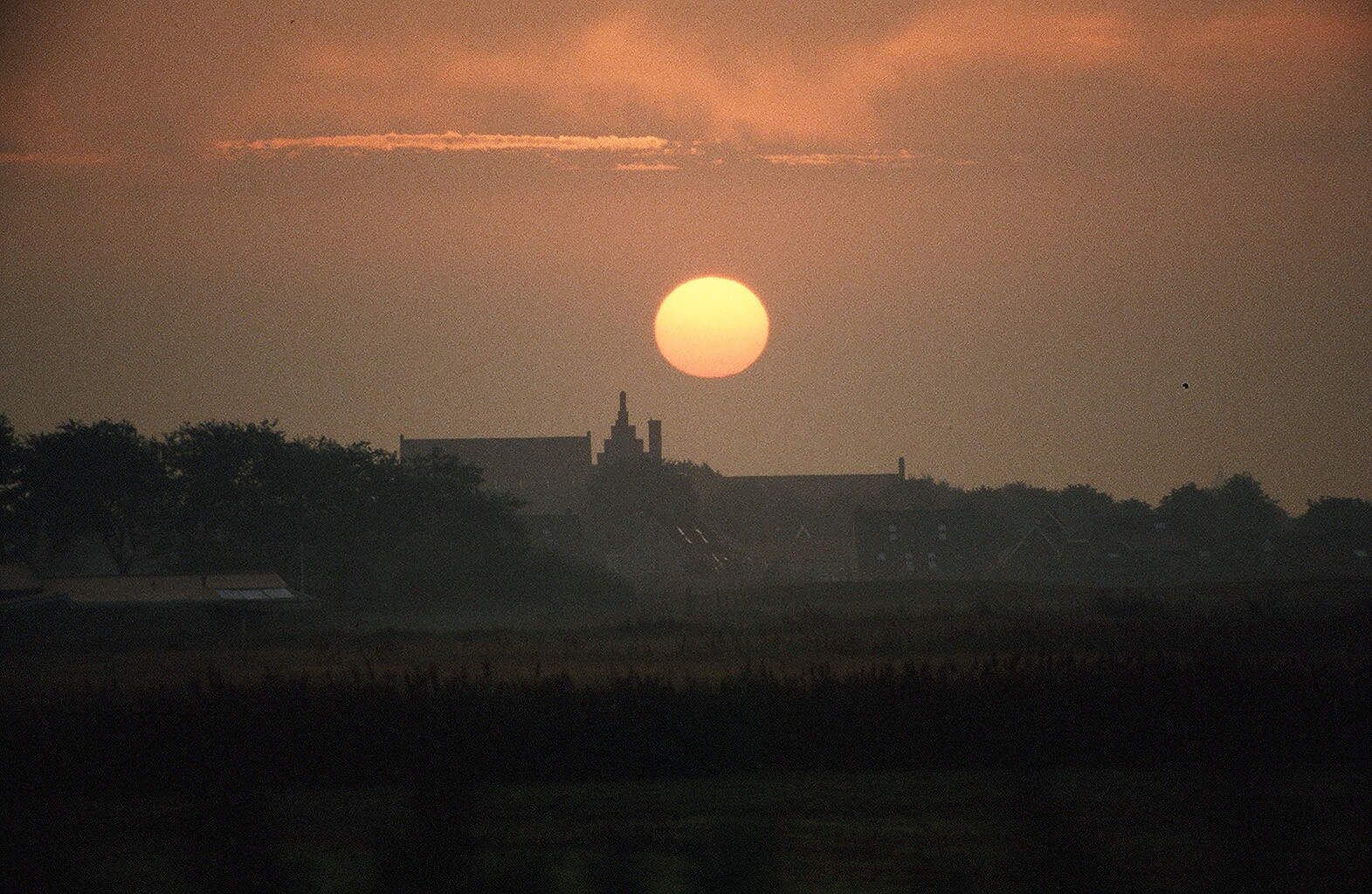 Egmond- Inside is a beautiful village in a vast landscape that has ever been given shape by monks. It has a lively main street with shops and there are some hangouts, touristy but it is not.

The magnificent dunes with bike- change- and horse trails are nearby, beyond which lies a wide and quiet beach. In the spring, the colored bulb photogenic. The special atmosphere attracts around the Benedictine monastery - as in past times - people from far and wide. The visitor of the Egmond Abbey is therefore recommended. Parking is always free at Egmond-Inside.

Rinnegom was formerly Rinighem, which may mean a place on the Rhine. It is a hamlet between Egmond-Inside and Heiloo and previously belonged to the abbey. The serfs who lived there, were not free to go where they wanted. Where now stands a youth hostel, what dead 1967 Rinne Goms the church, who was meant for all Egmonders who went to walk there. The R.K. cemetery is still there and the cafe (now a restaurant) that was visited in days after church pressure.

History: It started on a shoreline

Far before our era lived here on a shoreline under difficult circumstances all farmers and fishermen. Traces of them are obliterated by the sea or buried under many feet of drifting sand. In the 7th century, the sea level dropped and there was a settlement on the spot where the Adelbertus Akker. This is the oldest Egmond, that in ancient writings also Eckmunde, Hecmunde or Egmunde hot.

According to tradition, landed around the year 690 a group of monks from a monastery on the coast of Ireland. Among them was Adelbert, a companion of Willibrord. The story is that Adelbert his good works performed in the area and then in Egmond came to rest. You could call him the first tourist. St. Adelbert state regularly with big letters in the newspaper because the local football club is so hot. The patron saint of Egmond-Inside also gave its name to the abbey, the R.K. church, a (disappeared) school and a street. Egmond aan Zee also once had a St. Aalbrechtstraatje, but that has disappeared in the sea.

The Adelbertus Akker and the well

The Adelbertus Field located in the dunes at the Old Schulpweg at number 18. It is a mystical place where all 13 centuries pilgrims come. The pastor of Egmond-Inside it says so beautiful: "There's strength in the ground." The monk Adelbert was very popular and in 740 buried on the field. Taste reassure the water from the well and maybe you will experience the healing effect. This source according to tradition was established when the mortal remains of Adelbert two centuries after his death were transferred to the monastery was founded in the neighboring Hallem now Egmond-Inner hot. Marl blocks give the outline of a church that once stood here. 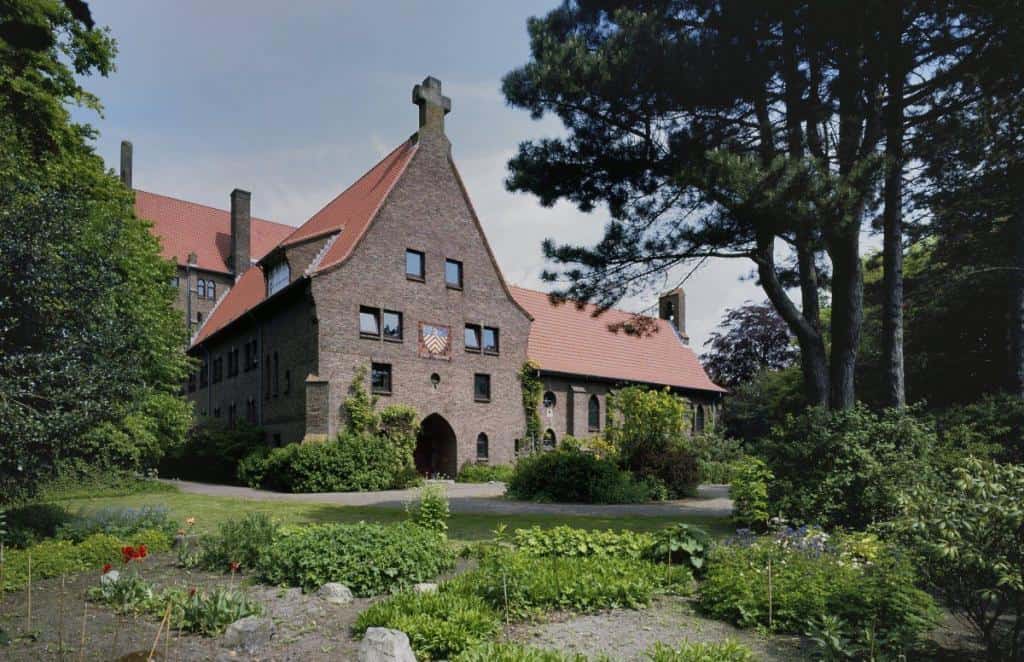 The abbey of Egmond

In the tenth century, Count Dirk II of Holland founded a monastery that became a powerful medieval abbey: a great center of prayer, art and culture. Monks wrote books here. In 1573 The abbey was destroyed by the Beggars of Sonoy to prevent the Spanish enemy would settle in the Abbey.

So too were the Lock on the Horseshoe and other churches and large farms in flames. Even centuries were the ruins in the landscape and did the towers still as a beacon for shipping.

In 1935 the abbey has been rebuilt and is home anno 2010 yet 13 monks who fully intend to keep it still for long in Egmond. Your presence at the prayer service in the abbey make them particularly appreciated. You can always inwards, even if they have already begun.

What you will find more in Egmond-Inside?

On a pilgrimage to North Holland? It is possible!­¤ś»
ŌĆöŌĆöŌĆö
On the border of the villages of Limmen and Heiloo is the pilgrimage site of Our Lady of Need. The history of this place goes minimal 600 years back in time. At the end of the 14th century, a farmer is said to have found a statue of Mary on his land and took it home. Miraculously, the statue returned to its location. Around the same time, a skipper in distress is said to have had a vision of Mary that brought him safely ashore.
ŌĆöŌĆöŌĆö
It was decided to build a Lady Chapel that has been around since 1409 appears in the archives. However, there are also other theories about the origin of the chapel. For example, it would have been built by a rich merchant from Alkmaar. There has always been a water source at the chapel, called the Runxput. The Catholic chapel with well became known and soon miraculous powers were attributed to the water.
ŌĆöŌĆöŌĆö
In 1573, tijdens het Beleg van Alkmaar, the protestants razed the chapel to the ground. Catholics, however, kept coming to the chapel ruins for the healing waters. The board of the Republic did not want this and gave orders to mute the Runxput.
ŌĆöŌĆöŌĆö
In 1713 the region around the well was affected by cattle plague. Some Catholic farmers thought it was time to ask Mary for help again at the site of the old chapel. They saw water welling up on the site of the old well, after which they repaired the well. The animals that drank it survived the plague and the 'Miracle of the Runxput' was born.
ŌĆöŌĆöŌĆö
To this day Catholic pilgrims come to visit. They come from all corners of the world to participate in the Marian procession, where they sometimes kneel or crawl along a route along, among other things, the well and the chapel in the sanctuary.
ŌĆöŌĆöŌĆö
Thank you manonoui for creating this post!! As for the short video: This was one of the first times we wanted to make a video for our page. It was beginning 2020 and we weren't happy with the rest of the footage­¤Öł­¤śå ...

Ōø¬ - ­ØŚ”­ØŚČ­ØŚ╗­Øśü-­ØŚö­ØŚ▒­ØŚ▓­ØŚ╣­ØŚ»­ØŚ▓­ØŚ┐­Øśü ­ØŚö­ØŚ»­ØŚ▒­ØŚČ­ØŚĘ ­ØŚČ­ØŚ╗ ­ØŚś­ØŚ┤­ØŚ║­ØŚ╝­ØŚ╗­ØŚ▒-­ØŚĢ­ØŚČ­ØŚ╗­ØŚ╗­ØŚ▓­ØŚ╗ (­ØŚ░­ØŚ«. ­Ø¤Ą­Ø¤»­Ø¤Ą - ­Ø¤Ł­Ø¤▒­Ø¤│­Ø¤» ­ØŚ╗­ØŚ« ­ØŚ¢­ØŚĄ­ØŚ┐.)
ŌĆöŌĆöŌĆöŌĆö
Saint Adelbert Abbey was founded as a wooden nunnery in the early 10th century by Count Dirk I. Saint Adelbert, what the abbey is named after, was a missionary from Ireland who came to the Netherlands in the 8th century to convert the Frisians.
ŌĆöŌĆöŌĆöŌĆö
One Ruopert from Mettlach wrote in 980 the Vita Sancti Adelberti about the life of this saint Adelbert. This booklet is the main source of all our information about Saint Adelbert and the origin of the abbey.
ŌĆöŌĆöŌĆöŌĆö
The current abbey of Egmond is located in a slightly different place than the original abbey. In 1573 let Diederik van Sonoy, on the advice of William of Orange, destroy the old abbey as well. Van Sonoy was afraid that the Spaniards, who were then on their way to Alkmaar, would use the abbey as a refuge. The story goes that the stones of the old abbey were used to strengthen the city walls of Alkmaar.
ŌĆöŌĆöŌĆöŌĆö
Last week thedutchhistorian visited the huis_van_hilde for a very interesting lecture by Paul Buitenhuis (oer_ij) about the history of Egmond Abbey and its influence on the development of the landscape in the Oer-IJ area. We will further explain these intriguing topics over the coming weeks. A painting of the old abbey can be seen in the photo.
ŌĆöŌĆöŌĆöŌĆö
#abbey #egmond #adelbert #alkmaar #diederikvansonoy #willemvanoranje #oerij #huisvanhilde #thedutchhistorian #egmondbinnen #sanctiadelberti #dirk #christian #8thcentury #slagbijalkmaar ...

This beautiful patch of beach grass caught my eye on my way to the beach. The skies had some nice tones as well, which gave it some nice contrast.

These days IŌĆÖm shooting vertical most of the time. It suits Instagram a bit better and itŌĆÖs easier to keep disturbing elements out of the shot.

However, I think IŌĆÖll return to this spot to do a horizontal shot as well to get more of a balance to it­¤śä

What do you prefer?
Vertical/horizontal?

The sheep were able to nibble on the #Japanese knotweed along the track in #castricum. Time to reload them!

Last Sunday, I visited Egmond Binnen,
ŌĆ£HOW MANY EGMONDŌĆÖS ARE THERE?!­¤ż¬ŌĆØ I hear you say...well;

- Egmond aan Zee (which is the most popular I think)

Both Egmond aan Zee and Egmond Binnen have beaches, but when visiting the beach in Egmond Binnen youŌĆÖll have to go down this small road by bike or by foot. ItŌĆÖs a nice 20 minute walk through the dunes.

While this area always has the looks, itŌĆÖs just a bit more magical when the sun sets ­¤żŚ

The sheep were able to nibble on the #Japanese knotweed along the track in #castricum. Time to reload them!

I'm on holiday in Egmond for a week. Normally those are long beach days in sunny weather, but that weather doesn't quite work. So we jumped on the (roetzbikes) bike to discover the area. Fotodump in 3,2,1.

PS: sorry for the black pictures in between. Instagram hates me, this really happens so often. Sad face. Very stupid. ...