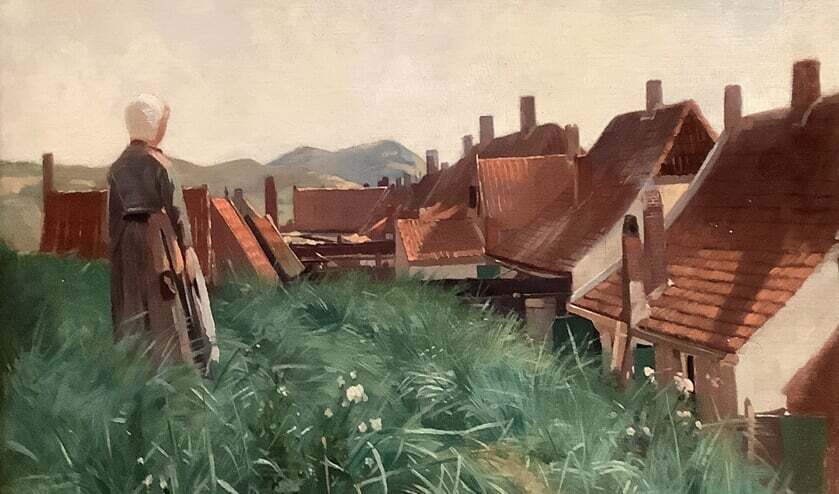 EGMOND SEA – The Museum van Egmond in the Zuiderstraat will open its doors every afternoon from this weekend. Who enters, will be surprised about the atmospheric metamorphosis of the museum. Newly discovered paintings of the Egmond School go together with the Derpers and village views that Roeland Koning from 1924 painted so wonderfully, including the Egmond fishermen's wives. The church that disappeared into the sea, got a spectacular place. All this breathes Derp, but not only that!

One of the new gems in the museum is the painting of a young girl who appears to be looking at a neighborhood in Egmond.. That last one still had to be checked out, but Nico Visser from the Derper image archive on Facebook was sure. The expression 'this breathes Derp' is his.

What is the girl looking at? Is it the old Musschenbuurt with a few artistic freedoms of the painter or is it the head of the Bergstraat? Museum volunteer David Schaddenhorst, who discovered this painting, thinks the first, but Ab Visser can name almost any house and is convinced that it is the Bergstraat. Finally, we'll get there. Who knows more, can say it.

The painting is by the painter Otto Kirberg, the round 1896/1897 has been to Egmond several times together with friends who also studied at the drawing academy in Düsseldorf, such as George Hitchcock, Gari Melchers and Heinrich Heimes. Van Heimes has loaned the museum a beautiful work with boats on the beach.

The volunteers are looking forward to receiving people again and also showing the new paintings by Paulus Gildemeester, Hendrik Hulk and Jacob Gruyter. All belong to the 'Egmond School', just like the panels behind the lifeboat. There is also a presentation about Gari Melchers and his Egmond models.

Egmond aan Zee is more than 1000 founded years ago by monks of the abbey. Later, the lords and counts of Egmont van het Slot op den Hoef were the boss here. This is how the three Egmonds are connected and the museum shows that in a new way. At the top of the timepiece are models of well-known Egmond buildings and there is much more. The Exposition about Egmond in the 1940s-45 will remain under construction for one more season.

Enjoy storm Bella: "Get some fresh air on the beach of Egmond