Around Egmond aan den Hoef are the Allium flower bulbs, better known as the ornamental onion, in full bloom again. Not a day goes by without the cyclists and motorists stopping to take a picture. It sometimes causes congestion on the Egmonderstraatweg. You can't escape this beautiful crop on the Herenweg to Castricum or towards Bergen. Marian Zwaan from Egmond aan Zee used her mobile phone in the morning 04.30 On the road for hours just to photograph the allium flowers with a rising sun.

Allium is the botanical name of ornamental onions and is a bulbous plant. It is a large group of plants, also known as ornamental onion or garlic. Because there are so many varieties, kunt u kiezen uit hoge en lage, early and late flowering, zone- and shade-loving Allium. You plant alliums in the autumn, between September and December. Preferably in airy soil, that doesn't stay too wet in winter. Most ornamental onions have a round inflorescence, Consisting of many tiny flowers. Together they form a large spherical sphere, but there are also ornamental onions with spider-like inflorescences such as the Allium Schubertii. The stems can grow up to a meter high. Ze zijn er in allerlei tinten zoals lila, Violet, pink and white. Butterflies and bees love the nectar of the flower that yields fantastic honey.

Plant the bulb with the root down and the tip up. Gemiddeld plant je de bol drie keer zo diep als de bol hoog is. A big ball of
about 5 centimeter, so comes in a hole of 15 centimeter deep. Give large bulbs space, een plantafstand van 20 centimeter is prima. Small balls can be planted close to each other; average 5 centimeter. Follows a dry period after planting, give Allium water immediately. Let the flower dry after flowering. Only cut the foliage when it has died off, this allows the bulb to store energy for flowering next year.

Large ornamental onions bloom on high stems where the leaves remain low to the ground. They do well in sun or partial shade. The flower stings
beautifully above the leaf. As a result, they also combine nicely with perennials that have a slightly later flowering time than ornamental onions. Lots of Alliums
bloom in May with a remarkably large bulb of purple flowers, while most perennials will not flower until June. This way they offer a nice transition between spring and summer

Smaller alliums, like the drumsticks bloom before, from April and stay lower. Find Drumsticks
a little more shade doesn't matter. Also the yellow Allium 'Molly' the goldfinch, is an early and low species. Part shade suffices for this charming and cheerful bloomer. Smaller Allium species are best planted in groups. 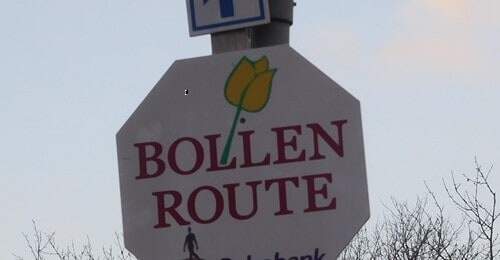 If you follow these signs, bike or walk a nice round of 20 kilometers along the bulb fields of Egmond. You can start at any point on the route. It is definitely worth doing this more often with an interval of a few days. You will then see the fields colors. Is the route known?, can you make it the other way around?. Everything will look different then. Enjoy watching!