The Story of Antonio Pravisani

The ice cream is 'famous'’ in North Holland and many (German) tourists like to come back to Egmond aan Zee every year for an ice cream from Pravisani. Marisa and Daniela know their favorite flavor from many regular customers. The ladies behind the counter are a 'familiar picture' to many. Fabio learned to make ice cream from his father when he was a little boy and still does it according to their own recipe. So, so to speak, Pravisani is a real family business. Fabio is the third generation. He learned the trade from his father and is now an ice cream maker. “I grew up with it.” His mother Marissa and sister Daniela spoil customers with his ice cream. They like to do that, know many customers and have nice conversations with them. They often work long days. In the ice bucket it turns or stands still.

While Fabio talks more enthusiastically about bronze than about ice, can't deny that it's fun and satisfying to watch people enjoy his ice cream. From King's Day (27 april) can this be done again. Fabio uses his favorite flavor himself, stracciatella.

While Fabio talks more enthusiastically about bronze than about ice, can't deny that it's fun and satisfying to watch people enjoy his ice cream. From King's Day (27 april) can this be done again. Fabio uses his favorite flavor himself, stracciatella.

Fabio Pravisani is certainly proud, but he downplays the wonderful fact that Pravisani ice cream parlor in the Voorstraat is celebrating its 75th anniversary this year: “Oh, it's just a benchmark year.” It won't be a big party anyway. 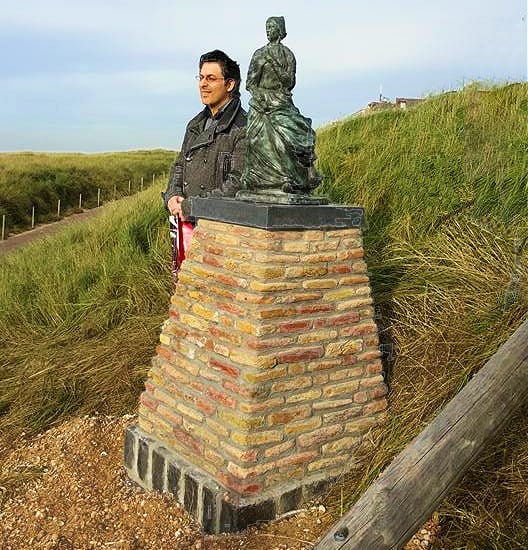 Suppose German tourists come and go for Pravisani .'s deliciousness, but if you want to enjoy your holiday in Egmond aan Zee, then you want – No, you should too – enjoy their ice cream, so it is already 75 year popular. They don't do it alone. Pravisani has a wide customer base which certainly consists of a large part of Egmonders and Bergenaren.

Which Egmonder gets or got an ice cream every week at Pravisani . in his childhood. The person behind Egmondonline.nl did that and knows the family well, he and Fabio used to regularly drink a drink with other friends on Saturday evenings and his parents who ran the liquor store in Egmond were on good terms with the fam. Straight.

The interior breathes history, with pictures of Fabio's grandfather Antonio on the walls. He fled Italy thanks to dictator Mussolini, first opened an ice cream parlor in Zaandam, but saw an opportunity for tourists in Egmond. In 1947 he started on the Voorstraat.

Egmond's horse in 'winter storage', see you again after refurbishment