GIANT WHEEL AFTER MONTHS AWAY FROM EGMONDSE BOULEVARD: "WORTH REPEATING" 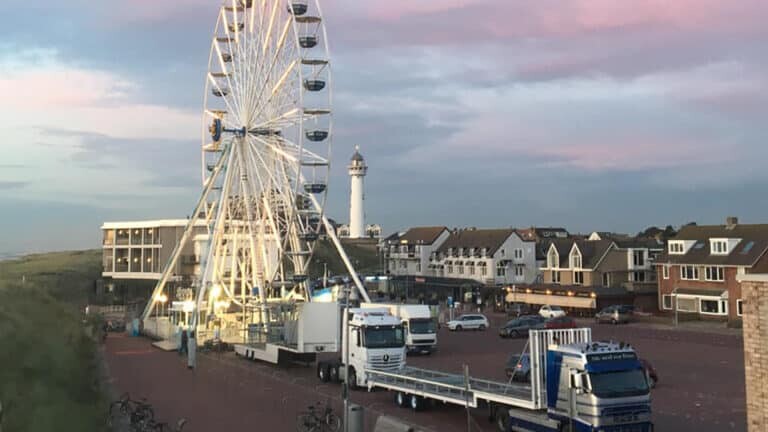 GIANT WHEEL EGMOND BY THE SEA REQUESTABLE FOR REPEAT ”

After more than three months it is 38 meter high Ferris wheel of the Egmond family Vallentgoed away from the boulevard. Monday the dismantling of the Europa Rad started and less than a day and a half later the trucks are ready to drive to the storage. Jan Vallentgoed looks back with satisfaction. “For us it was a successful solution in the corona era.”

“The whole company came to a standstill without fairs or festivals”, Vallentgoed explains. “Then you try to stay upright. We looked for an alternative and this appears to have been the rescue, along with the corona support from the government”. That the municipality of Bergen turned out to be benevolent, was a bonus. “I was born in Egmond and lived there until shortly before I got married. Since then I have been traveling as much as possible with the Ferris wheel, but my parents still live here.”

The Europa Wheel would initially remain in place until September, but eventually it became the end date 25 October. Unfortunately, that did not yield much more. “I am very satisfied with the first period. Everything went well, the weather was beautiful and that was reflected in good business. The last period it was less because of the worse weather, especially on the weekends.”

From storm Francis 25 August and the storm 21 October Vallentgoed had little trouble. “The Ferris wheel is rock solid. Only the decorative elements are not really resistant to storms. We removed them beforehand, so there was no damage”. He was also not bothered by vandalism. “We had been warned about it. We have put up a camera installation with warning signs. We have had no problems.”

Still, a lot of maintenance has to be done. “The salt and sand are an attack on the material. It is first thoroughly cleaned and lubricated, so that the wheel is ready for use again for possibly the following”.

What that will be… Fall property is not yet optimistic. “It still looks grim for large-scale events. There will certainly be no fairs until the summer, big festivals and the like”. Perhaps the Egmond beach boulevard will be available again. But the Ferris wheel man would also be interested in an agreement for the more distant future: “I will not hesitate if there is the possibility for a permanent place.”

First go back to storage and thoroughly soak and lubricate.

Join and explore the future of the municipality of Bergen,