EGMOND SEA – Pastor Rudolf Scheltinga of the Old Catholic Church in Egmond aan Zee is leaving this summer for an Old Catholic parish in Amersfoort. He was pastor in Egmond for over eleven years and a well-known figure in the village. In addition, Scheltinga enthusiastically participated in our series "Van Streek in de Stad", in which he exchanged places for a day with a minister from Amsterdam Southeast. Now he is really leaving Egmond behind. “I am going back to the place where I lived and worked for years.”

Pastor Joke Kolkman, previously worked in Arnhem and Utrecht, will take its place. The changes will take place in the course of the summer. Several parishes will also be renovated to a greater or lesser extent. “I will miss Egmond in heart and soul after having enjoyed working there for many years”, the pastor tells NH Nieuws.

“We hope that the view of these intended changes will give us some extra courage to weather the limitations presented by the current crisis. We pray that it may contribute to the continuity of pastoral care and the further building up of the church”, writes the church board.

Churches across the country are under threat of closure. That is why a church vision is drawn up in various municipalities. A vision for the future is also being worked on in Alkmaar. This is done in close consultation with the church owners. “Too few people and finances come in”, Scheltinga responds. “That hurts, but we should not dwell in that pain. but use large church buildings more widely.”

The pastor hopes that churches will be used for more purposes in the future, like a concert. “It is quite special that such a large building is only used for the church service on Sunday. Nowadays concerts are also held in several churches because of the beautiful acoustics. But that is not possible for the time being because of the measures.”

Scheltinga also lived in Amersfoort before coming to Egmond. There he was then pastor of a Roman Catholic parish. In 1998 he joined the Old Catholic Church, and went to work in the BovenIJ hospital in Amsterdam-Noord and for the archdiocese of Utrecht, among others.

Previously he did pastoral work in Roman Catholic parishes in the Noordoostpolder. Scheltinga is originally from Friesland, 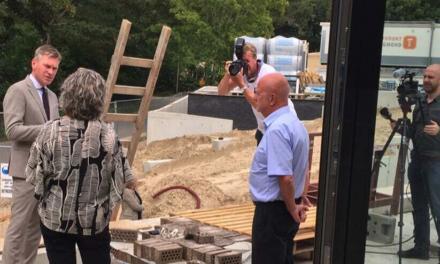