Arms and the flag of Egmond 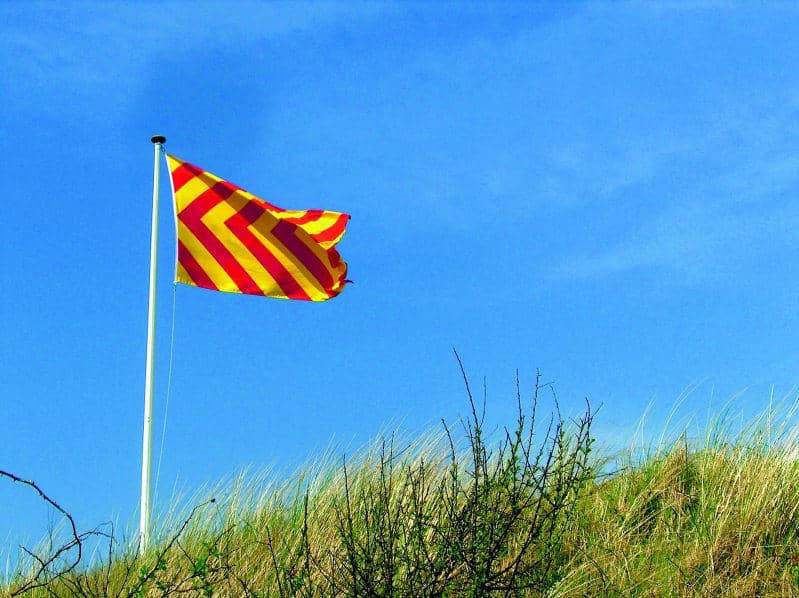 Twills of gold and "throat"

Egmond flag is based on the stem arm of the lords and counts of Egmond, that all around the year 1200 in forced what. It was marked by squares of gold (yellow) and 'throat' or red. Throat is the heraldic red color that stands for courage and sacrifice. Gold means wisdom and wealth.

Originally performed the municipality Egmond-Inside, which also belonged Heiloo, a weapon of gold loaded with seven rafters of throat. Egmond aan Zee conducted a weapon of gold, loaded with six squares of throat '. One twill less, in fact this was the only correct Egmont weapon, with as many squares as the tribe weapon.

The coat of arms of the new municipality Egmond.

In 1978 merged the three Egmonds not to everyone's pleasure to the congregation Egmond. The new council founded 12 May 1978 a petition to the High Council of Nobility to obtain a new municipal coat of arms. The application must have been sent a preliminary draft: a combination of the Egmond weapons and

weapon Wimmenum, which has three moons.

The literal proposal: a weapon: “of gold laden with six gules, and in the free quarters of saber laden with three waxing moons of silver.” the answer of the Supreme Court of Nobility turns out to be quite surprising. For me too, because I seem for years to have a copy of that letter in my possession. A letter Egmond pride rather fueling

The special letter from the High Council of Nobility

How I came to that letter 8 June 1978? Suddenly I remembered and I stood in thought in the then new historical library of John Lute. Egmond amateur historian who unfortunately no longer among us, I was showered with Egmond history and I go at it this remarkable copy home given that I then forgot entirely. Like no other, he realized the importance of that letter.

Now I read with red cheeks:

If one area is eligible for the conduct of the arms of the Counts of Egmont, c.q. the county of Egmond then the area created by merging the two municipalities Egmond aan Zee and Egmond-Binnen.

Therefore the board would You recommend Wimmenum part not to include in the new weapon etc.) In view of the fact, Egmond was one of the few counties in the Netherlands, the Council has no objection to this fact as a "special historical circumstance" within the meaning of Articles 5 in 6 the guidelines of 1977 to consider.

The Board therefore proposes you a crown of rake leaves, which is considered in the order of crowns as a "higher" than that of three leaves and two pearls, which is normally granted to public bodies. The council has no objection to the shield and would therefore want to revert to the seal of Charles, the third Earl of Egmont (* 1541), one of the few pictures of the Counts of Egmont, bearing shield holders. In conclusion, the Board will then become a weapon which reads the description: "Herringbone twelve pieces, gold and throat. The shield covered with a crown of five leaves and held by two lions of gold beholding, tongued and nailed throat. "

The new weapon of the municipality of Egmond 1978

On 23 June 1978 focuses mayor A.G. Bakker himself to the council with a request to be given. On 25 August Queen Juliana grants its approval and Interior Minister Hans Wiegel comes to pass on yet. A stone with this coat of arms is placed on the former children's colony house 'Zwartendijk' because that is the new town hall for the merged municipality (In politically turbulent times called 'The savage Height'). Thanks to an attentive Egmonder, the stone was saved from the waste bin and since 2007 can be found on the outside wall of the Museum van Egmond in the Zuiderstraat in Egmond aan Zee

The merger with Bergen

In the years 90 is led by Mayor Brommet talked about the inevitability of a larger merger municipality. This has in all the villages involved a lot of tedious. Initially Egmond sees more in a merger with the municipality Heiloo, but does not want us Heiloo. On 1 January 2001 merge Mountains, Egmond and Schoorl. Under this express condition, that each center must retain its own character. At first it seems that the new municipality has a new name, but eventually the church was still Mountains. There should also be a new municipal arms also come about that is a lot to do.

The artist of the High Council of Nobility has again created something special. Left upper arm of Schoorl, Right below that of Bergen. The creatures on those weapons are silver blackbirds without beaks and legs or 'merletten'. The rest is of course derived from the Egmond weapon. Egmond has a grave past? The whole sturdy upright on a surface of sea water and undulating sand dunes.

But politics has many drawbacks. Is this design might Egmont? And lions, Egmond also had that from 1978? Also from Egmond come objections because the rafters no longer pose a whole. People would rather see at least the top half of the shield become 'Egmonds'. Jan Lute puts it together like this. At the Supreme Court of nobility is one "not amused". Without much consultation there is a much simpler weapon created. Want to know more here? Read how a 'Sudeten Derper' is still trying to save what can be saved and how the current coat of arms of the municipality of Bergen was created.

You can also buy the flag at Dekker bookstore!

We go back in time. After the merger of the three Egmonds in 1978, on 18 december 1980 also enacted an official flag for the city of Egmond with 6 red chevrons. The municipality only orders a few copies for official bodies. It's the crew of the Pinck flying the flag 2007 in the top of the mast and thus hangs Egmonders many hits in the heart. There is demand for the flag and the board of the Historical Egmond has the courage to order a thousand. Historical Foundation Egmond there is an action of the occasion of the 15th anniversary in 2008 and also hopes to recruit many new donors (receiving the flag with discount). From May 2008 is the Egmond flag for sale on several addresses in Egmond and on the market during the village festivals. The intention is now to unfurl the red and yellow during festivities in the three Egmonds like the marathon, de Art Market, Hoever animation, the Visserijdag and Egmont on his Cup. The responses and the large number of orders shows the Egmont Feeling alive! To order the Egmond flag you can click here to go to the order form.

You will therefore understand that on the fishing day in a Derper lecture, those precious Egmond lions are sometimes spoken with melancholy…

“Twilled of four pieces of gules and gold and eight sunwise placed merlets of silver and gules. The shield covered with a golden crown of five leaves”.

A striking feature of this new weapon is the absence of lions and therefore also of the pedestal with the symbolic representation of the dunes and the sea. De vijfbladige crown, that what is depicted richer, still remembers the past Counts of Egmont. Of the 12 rafters of throat and gold of the weapon of Egmond there are now four remaining, However, larded with Schoorl and Bergen merletten, the ducks without beak and legs. The Egmonders must therefore now set with merletten instead of lions and it is easy to guess what people think about it.

Incidentally, there is sometimes confusion about the right arm. The rejected weapon appears to have stood still for years at the site of the municipality of Bergen. On other internet pages (or stood in the writing of this article in 2007 ) the rejected and not the new weapon. Is it perhaps because they think actually the first weapon better than what it eventually became? And what did the (same) cartoonist himself of? He has not been under this new weapon signature, but only put their initials.