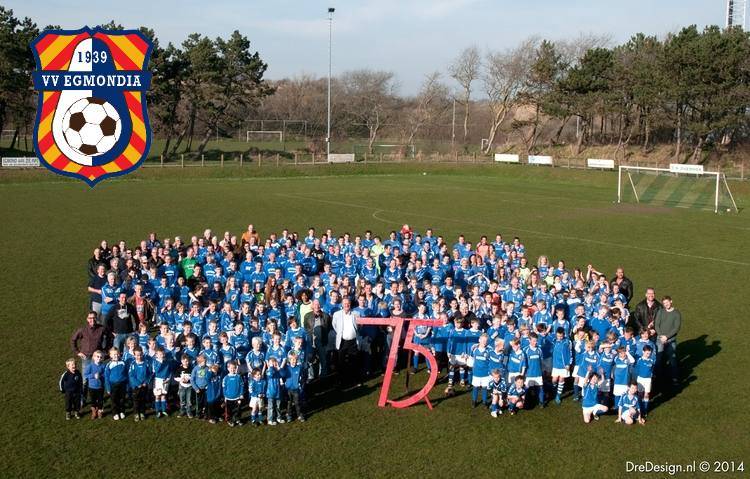 In 1932 the first football club of Egmond aan Zee was founded. Chaplain van Zanten of the Old Catholic Church was the initiator and baptized the club 'Egmond Serbian Boys'.
Because there was no available land in Egmond aan Zee, a piece of land on the balls Broekakkers in Egmond-Inside was hired. The site was from Heiloo just before the forest 'Waterrrijk', to the left of the Herenweg. Changing clothes one did in a bulb shed and water to wash it pulled out of the ditch.
The Egmond Serbian Boys was a formidable opponent for many clubs, the club was several times champion. Yet six years later came an end to this so successful club. The players had to Egmond aan Zee Egmond-running within and after the game again that all the way back. It was that much Egmond families did not have the wide and many boys with fishing earned their costs. Thus, they were often away from home. There were fewer and fewer members and 1938 Serbian Boys Egmond was taken out of the competition because they could not bring more complete team on the leg.

Much to the chagrin of many Derpers. It was the year after that in the barbershop Klaas Stiemer the plans were made for a new football club. On 19 May 1939 once again founded a football club named "Egmondia '. The board consisted of chairman Piet Zwart and members Cor Blok, constable W. This Bruggencate, Jan Glas, Siem Black and hairdresser clerk Gerrit Mulder. In cafe "The Gilded Falcon 'a fancy fair was held and the proceeds of fl. 320,- was the initial impetus for the new football. President Piet Zwart could rent a piece of land from the widow Valkering for fl. 200,- per annum. The bulbs of the family barn Hopman served as dressing room. The players from both teams and referees together. However, that once led to lively discussions after a won or lost game. In 1940 war broke out, but the first few years one could still just football. When the village was evacuated was of course no longer possible, but everyone still kept in touch with each other. This made it possible for Egmondia after the war was almost immediately further.
The bulb barn was exchanged for an abandoned German bunker as a dressing room on the other side of the van Oldenborghweg and so has Egmondia played there for three years.

On 10 september 1948 the new sports park was to "long lake" opened with a match between Egmondia and THB from Haarlem. The sports park that existed before from dune lands, was dug up to two meters deep Egmond fishermen. This could not fish at that time because of the danger of mines so soon after the war. In the context of the relief work the sports was constructed.
As chairman of Egmondia pastor explained Van Zanten on 23 March 1949 together with Anton Gul, the captain of the Egmondia-cubs, the first stone of the new clubhouse.