Other, dangers and tides

Sea water waves over the sandbanks

Sea water waves over the sandbanks to the coast, but back, the water mainly searches for a way between the sandbanks. Via the so-called "muien’ the water can flow away at such high speeds that it is impossible to swim against it. Who unexpectedly ends up in a mouse, it is therefore recommended to swim along the coast towards one of the sandbanks, to come back to land from there. That doesn't work, then try to catch other people's attention. 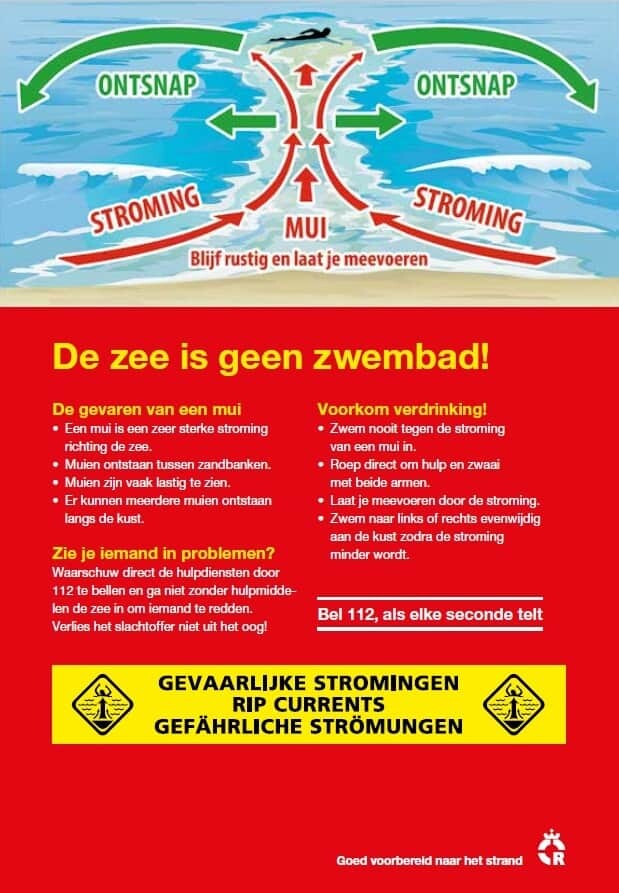 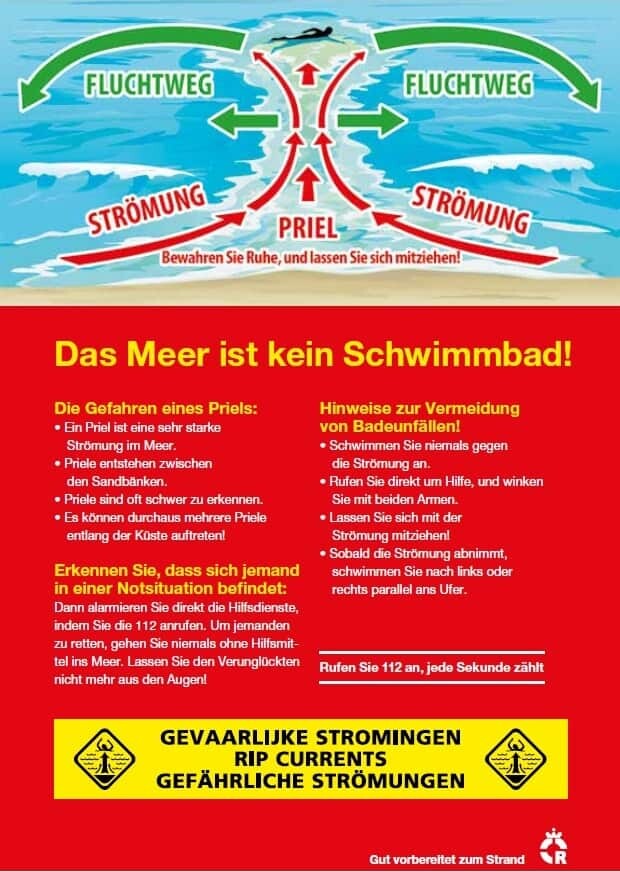 A great danger to the Egmond beach are the rips. A mui is a deeper section perpendicular to the coastline between two sandbanks. The water between the beach and the sand banks (zwin called) flows at rising water (from low tide to high tide, then flood it) and falling water (high to low water, then the tide) towards this deeper portions. This creates a powerful flow towards the sea.

This seaward flow itself is not dangerous because it weakens further from the coastline but the additional matters are dangerous. These include ignorance, anxiety, fatigue, (salt) water eye / mouth, overestimating yourself and underestimating the power of the sea.

What can you do:

Please note: mous is always present and the location can vary daily. The rescue teams give all the dangerous points through signage or deposits.

The sun and moon exert attraction on the water. This water moves, both in vertical and horizontal directions (called tidal phenomena). Because of these movements causes a highest (HW) and a lowest (LW) water level. From the moment of LW to the time of the HW rice water (flood), from the moment of HW to the moment of the water drops LW (eb). The attraction which the sun and moon on the earth is not everywhere gelik, but depending on the position, that a place on earth at any given time occupies relative. maan en zone. There arise differences in appeal by the rotation of the earth on its axis and the rotation of the earth around the sun; with the result, that the water on earth got into a regular motion: of getijbeweging.

The tidal movement you can best conceived as an enormous wave, resulting rolls over the earth. If the top of the wave has reached us, we have high water, as the valley has reached us, low tide

When the collaboration by the moon and the sun caused tidal waves, d.w.z. as they have almost the same time high and low tide, then it is called spring tides. Then the decline is greatest, m.a.w. high tide and low tide is the highest compared with the lowest. previous water. Also, the water then flows most strongly due to the largest decay. Approximately every fortnight there is spring (nl. the time between new moon (NM) I film by the (World Cup)

When the tide-causing forces working against each other, neap tide occurs. That is the situation in the first quarter moon phases (I) and last quarter (LK). I and LK are ca.. seven days after resp. NM a VM. This means, that ca. seven days a neap tides and seven days later a spring tide.

When the sun and moon as it were into each other's extended stand relative to the earth, then they join forces and draw more water. We call this spring. The level of the water is higher than at high tide and at low tide lower. The moon and the sun can also work against each other. That happens when the two bodies are at right angles. Is then drawn from two different sides to the water, with the result that the water rises much less than average. This phenomenon is called neap tide.

Spring tide occurs twice per lunar month (from 29,53 days) for. You would expect that the spring tide at full moon and new moon. However, it turns out to be two days later.
The lunar orbit is in general at a certain angle with respect to the Earth's orbit around the sun. This puts the sun, earth and moon almost never aligned. If this is the case, then arises a lunar or solar eclipse for.

The zongetij, with a PERIOD OF 12 hours, retrieves the lunar tide, with a PERIOD OF 12 hours 25 minutes, constant. This ensures, that the lunar tide will suffer a beating: it is periodically strengthened and weakened. It also has an effect on the timing of the tide. Between spring and neap tide has zongetij vervroegend an effect on the tide, between neap and spring a retarding effect.